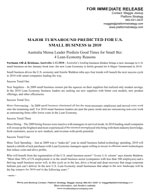 4 Extraordinary Tips to Boost Your Business in 2009

- New Thinking From Australia Mensa Leader Ainslie Waldron
These New Years Business Resolutions will catapult your company to new heights in 2009.
Eliminate your biggest barrier during January Every business has at least one roadblock to their success and it's easy to spot with this simple test for  business owners: "What is the one thing that frustrates me the moment I walk into work or keeps me awake at night?"
Sometimes the barrier is a person in the wrong...
Read Full Article